Halloween has always been one of my favorite holidays.  Usually I invite my friends over to watch zombie movies and drink pumpkin ale, but this year I didn't have anything planned and I was pretty bummed about it.

As I arrived home from work, I decided that doing nothing was unacceptable so on a whim, I dressed Duncan in his trusty dinosaur costume (thanks, Lauren!) and we went trick or treating!

I've always loved trick or treating.  The costumes and house decorations are so creative and it's the one time of year everyone's door is open and neighbors are meeting each others' families.  Parents take off work early and bring their children around in a world of make-believe and spooky fun.  However, as I was growing up, trick-or-treating seemed to be dying out with parents taking their children to malls where it was safer.  I was worried Duncan and I wouldn't find any one out and about. 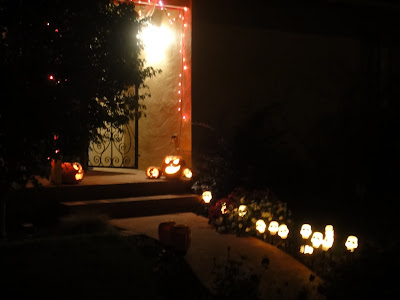 Wow Mountain View, did you prove me wrong.  Mountain View's Halloween is completely off the hook.  It is bigger and better than any of the Halloweens I had growing up.  There were so many children, parents, aunts, uncles, grandparents, dogs, friends crowding the sidewalks that Duncan and I had to walk in the street half of the time.  All the children were giggling and the people handing out candy smiling.  Everyone was having so much fun! 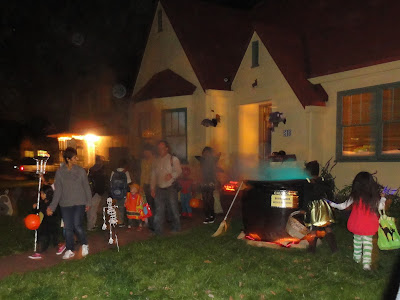 The decorations were nothing short of amazing.  They included a spinning tunnel you could walk through (to get extra dizzy) and a complete animatronic-ized haunted house/graveyard display that, in my opinion, surpassed even the Haunted Mansion at Disneyland (it turns out the owner, after catching the attention of amusement parks, now consults for them on these things). 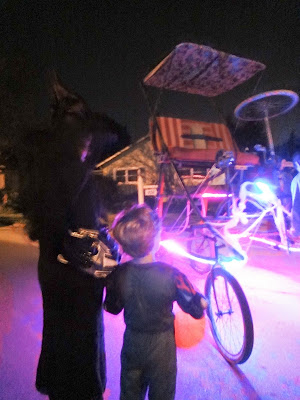 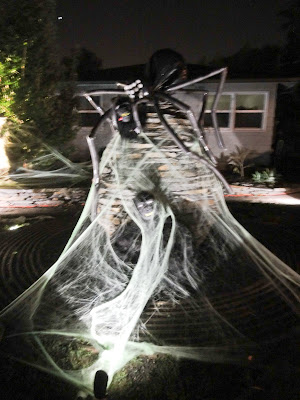 Duncan had a great time taking everything in -- his tail staying tightly curled up and his nose, eyes, and ears exploring everything.  He was quite the center of attention being his cute self in his cute dinosaur outfit (proud dad) eliciting squeals of "doggie!" from children and adults alike.  The only time he was a bit spooked was at the haunted house with all of its booming voices and sudden sprays of smoke. 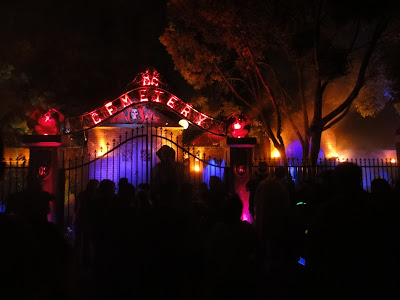 As we hit the end of the houses, we did end up knocking on one door exclaiming "Trick or treat!"... that of Matt and Maricia and Duncan's good friend Luna!  After wresting with Luna and stealing her favorite stuffed turtle, Duncan and all of us went out to explore the neighborhood some more.  Then finally it was time to head home. 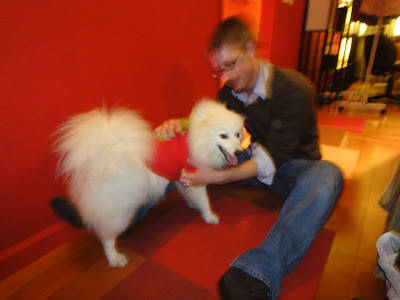 To top off the excellent evening, I dimmed the lights, lit a pumpkin spice candle, and watched an episode of my favorite Halloween show, The Simpsons Treehouse of Horror.  I looked next to me to find my little one all tuckered out.  What a wonderful Halloween. 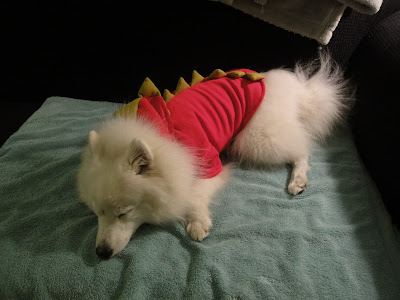