Sitting for a treat

Duncan's cuteness for the day:
It turns out if you tell Duncan you have a treat but don't give it to him, Duncan will run around sitting in random places and containers until he gets the treat. Today's sitting destinations included:
-- Beside my chair
-- On the balcony
-- Inside his litter box
-- Inside his toy box
-- In the middle of the living room
-- Inside his crate

My happy place today: standing on the balcony in the bright sun with my puppy by my side watching the white clouds blow by and sun rain fall.
Posted by albertkuo at 1:01 PM No comments: Links to this post

I am thankful for...

Just one of the many things I'm thankful for this year: 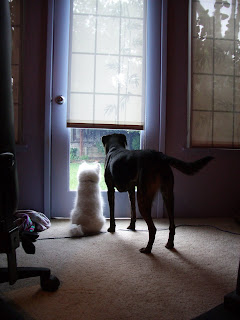 Photo by Matt Rosin
Posted by albertkuo at 3:44 PM No comments: Links to this post

Puppy (aka Duncan, Dunkie, Punky Dunkie, Dunkie Pooh, Powdered Doughnut) graduated from Puppy Preschool today! Each of us took turns performing all the tricks we learned in class in front of everyone. We did sit, down, stand, stay, spin left, spin right, touch, "stick 'em up!" (look like a prairie dog), and on the side with reasonable success, especially considering I've been slacking a bit on daily Duncan training. What can I say, I'm a busy single parent!

The class was a blast. After hiding under a chair for five weeks, Duncan finally came out to play with the big puppies today! Everyone was excited to see the little snowball bouncing among the rambunctious puppies.

I've decided they should make puppy class a type of therapy for people. It's been a stressful few months for me and I can say without a doubt, almost nothing cheers me up as quickly as a tumbling pile of fuzzy puppies. 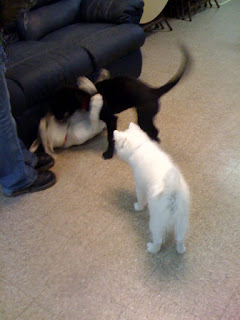 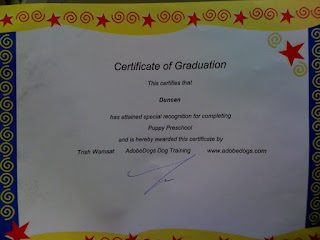 Just a quick update to the Comcast "saga". Mark, amazingly enough, responded to my previous unhappy post. He was very helpful and put me in touch with a regional representative and she helped iron out my issue. Now I'm back to Comcast internet only for my pre-TV price, just like I wanted. It's not even the best price out there -- I'm just happy to have the old price back just like they said I could. Hooray for some great customer service! Anyways, just wanted to give credit where it's due.
Posted by albertkuo at 11:14 PM 1 comment: Links to this post

Mark Casem from Comcast, if you're reading this, this is for you.

Two posts ago, I mentioned how a really wonderful lady at Comcast made my day. Mark Casem, from Comcast (who scours blogs for Comcast feedback) left a comment asking for my account info so that they could use my service-person as an example. I hesitated because I've always been wary of Comcast and wanted to make sure everything was panning out correctly before I gave anyone special recognition.

Turns out I'm glad I never gave my account info and I'm glad my service-person was not used as a positive example. She flat-out lied to me and ended up costing me quite a bit of money and since Cocmast is a monopoly here, I have no way to express my anger but to keep paying Comcast more money. How f'd up is that.

I began with $25/month internet service. Then I added on cable TV. I asked her explicitly many times if I could remove the cable TV without raising the price of my internet service as this happened to many of my friends. She reassured me repeatedly that it would not raise my price -- a decent business practice -- I was immediately suspicious. However, I took the calculated risk and went ahead thinking I'd never have to cancel my TV service.

So I guess I'll add this blog post onto the mountain of anti-Comcast material. If you want internet, try ATT Uverse or DSL. If you want TV, just get Netflix or watch stuff off the internet and over the air. There's more material on the internet/Netflix than I can watch in a lifetime.
Posted by albertkuo at 3:58 PM 1 comment: Links to this post

i has a puppy

He is cute. I am sleepy. See him here: http://albertkuo.smugmug.com/Duncan 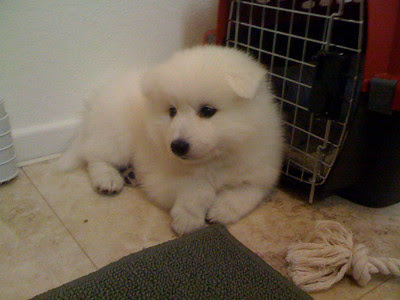 Posted by albertkuo at 12:36 AM No comments: Links to this post

The wonderful Comcast lady made my day

I had a really, really bad day today. I spent all day snapping at friends and falling behind at work. I've been moving non-stop since Saturday and I'm exhausted in mind as well as body and I feel like I have no home.

Ordering cable from Comcast was the last thing I wanted to do after all of that because I expected it to be a negative experience. Instead, I stumbled across a hidden jewel. Her name is Verselle and she is a wonderful human being. Talking to her made my day.

She has integrity. I called her last week to add TV to my previous internet-only order. She said she could add it but she'd have to cancel my internet order (because it hadn't been installed yet) and rebook it under her name. That would cut into someone else's commission so she risked her own commission and told me if I could wait until after installation (today), she would call me back and set it up then. She even threw in a bunch of extras to make it worth my while.

She works hard and has a positive attitude. She takes her call center job seriously and took it the extra mile by offering to follow up with me after activation and managing my account so I could have a customized deal. While we were chatting, I got the feeling that the economic downturn had been difficult for her and her family, yet instead of being bitter about it she was simply thankful for my business and wished me well.

She is generous and caring. Her blessings for me were so sincere I was left speechless.

Meeting people like her always makes me take a good hard look at myself. At the same time, it also makes me feel comforted and thankful knowing that there is so much good out there.

Earth really is a beautiful place. Can you imagine if you saw this rise every evening in the sky instead of the plain-white disc of the moon? I'd be wondering what it was like on that world. Lucky me!

Christmas Party 2008 photos are up!

After over five years at Strongbadia (our condo), Will, Lauren, and I decided it was time to really let the place shine, so we threw the biggest holiday party we've ever thrown. Coincidentally, it landed on the evening of my birthday. Thanks to the company of all our friends, it was one of the most special birthdays I've ever had.

BSG.. what a beautiful farewell

When my friend lent me her Battlestar Gallactica DVDs, I was skeptical. Are you kidding me? Why would I ever want to watch a show based on a campy 70's sci-fi series with such a goofy name starring some guys and half-naked lady robots. It sounds ridiculous!

The DVDs sat on my coffee table for months collecting dust. Then one day, I got so bored and had so little to do that I had no choice but to see what all the hype was about. The result of that one moment of boredom was completely, unexpectedly wonderful. My friends and I have subsequently been taken for a ride on one of the greatest dramas in history.

One of the most striking things about Battlestar Gallactica was that exactly half of my friends following it were women. The only other science fiction story I know to break through the aversion most women have to science fiction was the book Ender's Game by Orson Scott Card. In both cases, the reason was clear. The stories were not about technology but about people and the human condition.

The most precious part of Battlestar Gallactica to me was that it was a high-saturation portrait of how I see humanity's reality. Nothing was conveniently black and white. The villains were heroic, filled with conscience -- they had souls. The heroes were flawed, selfish, sinful, yet pushed to succeed in spite of themselves. Their world was scientific, yet no one could escape their greater purpose, their destiny.

Last night, my friends and I gathered with drinks in hand and trepidation in our hearts and watched the final episode of the series. If I only had one word to describe it I would say it was beautiful. Every character found the end of their journey. At the destination, some found a new beginning, others found completion. All found peace.

"Angels walk among us," is a quote from the show. It's true. There are those like Ron Moore and the cast and crew of Battlestar Gallactica who can bring us a gift like this work. It is a rare thing for any story to remind me that outside the depths of ugliness within humanity, the universe is a beautiful place and it makes me grateful to be a part of it. I'm sad to see Battlestar Gallactica go, but like they say, "all this has happened before, and all this will happen again." The future does bring great things.
Posted by albertkuo at 10:19 PM No comments: Links to this post

An Afternoon with Reco

Recently, I've taken to snapping a photo or two every day with my iPhone and sending it to whomever might care how my day is going. I figure it's an interesting glimpse into my daily life. My blog has traditionally been about weightier and more introspective things, but sometimes the best things in life are in the little things that I pass by on a sunny Sunday afternoon. So I figure hey, why not share these photos with the world!

This Sunday was particularly wonderful. It was warm and sunny like it hasn't been in NorCal winter in decades, the hills were green, the sky blue, and the air fresh. Reco and I went on a walk in the back country adjacent to the barn and I snapped a couple photos along the way that I felt embodied the experience. The ride reminded me why I love Reco and this riding thing so much.

After I galloped up the hill, an older gentleman who'd been watching stopped to say, "Now that is a beautiful thing." And beautiful it was -- I felt like the most fortunate person in the world.

Reco and I on Central behind the barn: 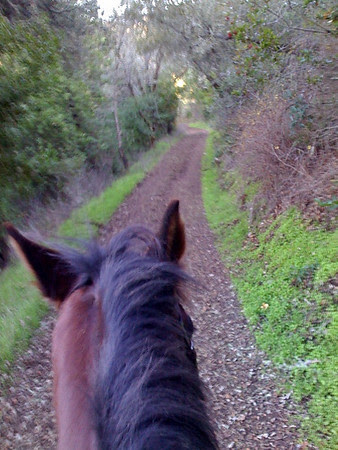 Reco and I atop Bryne overlooking Stanford and the bay: 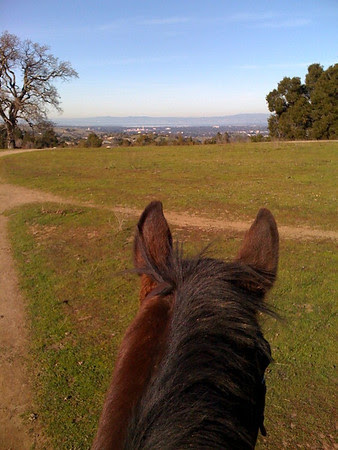 Posted by albertkuo at 5:05 PM No comments: Links to this post