Moving in the horses

Finally, both Reco and Decision Time are are moved out of their stalls and into the feeding pasture. Both have had to slowly peck (bite, tear, kick) their way up the social hiearchy. Apparently humans aren't the only animals that can be cruel to each other.

The resident alpha horse of the pasture, Snowball: Ender of Worlds (Yes, his name really is Snowball. Guess what color he is?) is finally content to leave Reco and Decision Time alone instead of attempting to fillet them alive. The blood has stopped flowing and all are well fed -- except for the poor worn J.B. who's only crime is being really really old. It seems that Reco, our submissive, unassuming, kind-hearted beta horse has pecked his way up from the bottom of the herd -- by pushing J.B. away from his food. Sigh.

Anyway, it's been a long journey. All the photos below can be found here on my smugmug page. Here's an email I sent to Jen (Reco's owner) after I put him into the feeding pasture after the first few days:

"Reco politely asked the Other Horse for a few bites to eat but was rebuffed. At first, he stood aside mournfully, but then his hunger got the best of him and he slowly crept toward the hay and stole a few nibbles here and there. Then upon realizing that this Other Horse, though ears pinned, was not Snowball: Ender of Worlds, Reco became brave and began to partake fully in the pile of hay. At last the Other Horse grudgingly accepted this new intruder and though they were not friends, there was food aplenty for all." 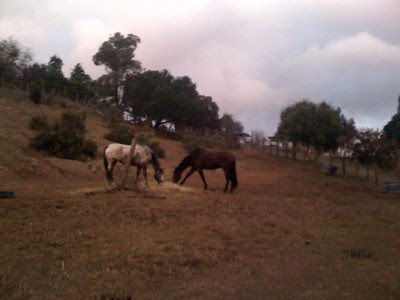 Here's a couple more photos of Reco and Decision Time: 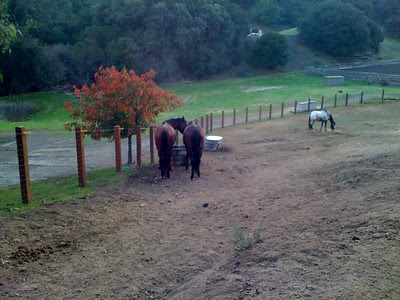 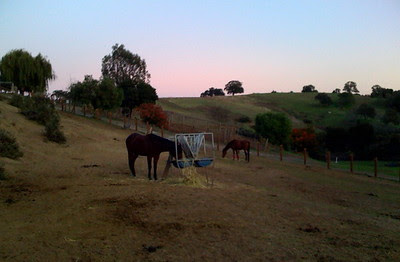 Posted by albertkuo at 6:16 PM